Hironobu Sakaguchi could well be considered the Shigeru Miyamoto of JRPG videogames. He created the Final Fantasy video game series; the ‘Final’ meaning his final stab at making a mark on the industry 30 years ago. 4 sequels as director came after that, and also had a hand in the most revered FF titles VI and VII. Sakaguchi went onto direct the box-office bomb that was Final Fantasy: The Spirits Within. This consequently led to Sakaguchi voluntarily leaving his presidential position at Square (now Square Enix). In 2004, Sakaguchi founded his own company, Mistwalker.

Back when Microsoft actually cared about the JRPG genre, Mistwalker initially signed up with them to produce exclusive titles for the Xbox 360. 2 of which are possibly the finest JRPG’s for the system: Blue Dragon and Lost Odyssey.

Blue Dragon is as traditional a JRPG as you’ll ever come across. A group of heroes set about to save their land from an evil ruler, traversing a massive world and using turn-based combat to defeat foes along the way. It does however boast unique qualities most other RPG’s at the time didn’t have. Blue Dragon was one of the first 3D RPGs released for the 360. It also boasts the unique art style of Akira Toriyama, creator of manga/anime series Dragon Ball. His artistic style and talent is also used in the Dragon Quest video game series. And to polish things off, the soundtrack is delivered from the immense musical talents of Nobou Uematsu, who also left Square to join Mistwalker with Sakaguchi.

Blue Dragon helped boost sales of the Xbox 360 in Japan at its 2006 release, along with game sales of over 167,000 in the first 10 weeks. Although in contrast Japan is an area that arguably Microsoft have now given up on; having only sold around 75,000 Xbox One consoles in total, and barely a JRPG even on the horizon. In it’s lifetime, Blue Dragon has managed around 920,000 unit sales worldwide, with over half of those coming from Japan and Europe.

“Microsoft sold 35,343 Xbox 360s – an increase of nearly 90 per cent over the previous week’s figure of just over 4000 consoles. It’s likely that the rise was linked to the release of Blue Dragon, which was developed by Mistwalker, the studio led by Final Fantasy creator Hironobu Sakaguchi.”
– Ellie Gibson, Blue Dragon release boosts Xbox 360 sales in Japan, GamesIndustry.biz

Although Blue Dragon has been somewhat criticised for being too-traditional, even old-fashioned, there are some nice touches. For example, the battles are not the often-loathed ‘random’ battles from past Final Fantasy games, but instead induced/avoided by engaging/escaping the on-screen enemies. Hitting them first also gives you the first hit once a battle is initiated. Blue Dragon may not reinvent the wheel, but that does it no harm at all. It comes on 3 discs, and will easily clock up 60 hours+ before reaching the end. Only the most hyped RPG’s of such magnitude would attract the casual western gamer; in comparison the immensely disappointing Final Fantasy XIII managed over 2 million in sales, with over half coming from the US.

Blue Dragon is much the better title, although less-appealing to many on the surface. The cartoon style graphics and action-figure style characters appeal more to anime fans, but the battle elements and grand-adventure style make it an essential Xbox JRPG.

Following on from the success Blue Dragon brought, a franchise was born. An anime series was created, 2 sequels were also developed. This time Mistwalker turned to Nintendo, and Blue Dragon Plus came to pass for the Nintendo DS. This entrant to the series was billed as a real-time simulation RPG. It retains the Toriyama-style visuals that define the series. The series’ transition from 360 to Nintendo’s plucky handheld gives it more of a Final Fantasy XII Revenant Wings perspective, a perfect blueprint for its RTS roots. The sequel also retains the characters from the original game, and many of its RPG elements, despite being more of an RTS title. It certainly ranks up there with Revenant Wings, and similar titles Heroes of Mana and Lost Magic. 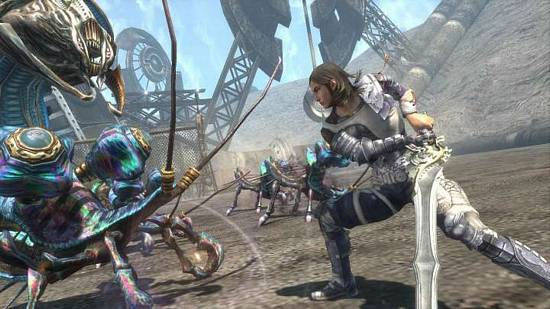 Blue Dragon Awakened Shadow followed soon after, not only continuing the real-time strategy elements of its predecessor, but also adopting Dragon Quest IX’s route of allowing creation/customisation of your own lead character.

Mistwalker’s other big release was Lost Odyssey, again for the Xbox 360. Boasting incredible visuals, this 4-disc epic is still a favourite among many an RPG fan, both east and west. For those that were waiting for their Final Fantasy fix at the time, this more than filled the gap. While there have always been varied opinions of Final Fantasy XIII, Lost Odyssey still sits firmly on my gaming shelf where Final Fantasy XIII is hanging on, possibly never to be touched again. Lost Odyssey may have reverted back to the use of random battles, but the battle trigger system (pressing within a time frame to land extra hits) is superior to Blue Dragon’s old school ‘press A and wait’ system, providing more interaction and more reward for doing so.

The story and characters are excellent, providing moments of danger, fear, action, even comedy, and giving the gamer a great sense of empathy to boot. You really feel you are following the journey that Kaim, the lead character, is taking, and will be as determined as he is to find out about his past and how he appears to be immortal.

Following the Nintendo DS releases, Mistwalker stayed with Nintendo, culminating in the production of The Last Story. It proved to be the Nintendo Wii’s swansong RPG, and is now becoming increasingly rare. The Last Story was Sakaguchi’s first title as director since Final Fantasy V, way back in 1992. A Wii exclusive, and still yet to be released on the Wii U’s Virtual Console (please please please), The Last Story is proof that Sakaguchi has definitely still got it. The back story is typical RPG: The Last Story is framed by the ongoing war between humans and the Gurak, set in and around the fantasy setting of Lazulis Island. The story is simple: boy meets girl, gains superpowers and proceeds to save the world. Typical life for a JRPG hero.

However, unlike your typical JRPG that last 60 hours plus, the main story is around the 20-30 hour mark, with no grinding required, as everything happens in real time. Its streamlined controls make it easy to pick up and go, and the action is fast and furious. This, along with co-operative AND multiplayer deathmatch modes, means that Mistwalker certainly have innovated the JRPG over the years, more so than the Final Fantasy series ever has.