THE CAVEAT: Any transfer bids must be accepted. Maybe Moreno will finally f**king leave (he did).

Aaaand we’re back. The season starts now. I’m a man down thanks to the disturbingly delightful sum of £8 million for Alberto Moreno. But i have a cunning plan for the interim: Jurgen Klopp’s ‘best friend’ Mamadou Sakho. He favours his left side and has strong positional sense, so he’s the perfect stand in. The first match is a nice home fixture against newly promoted Middlesborough. Should be relatively risk free to try it out. But what’s this? 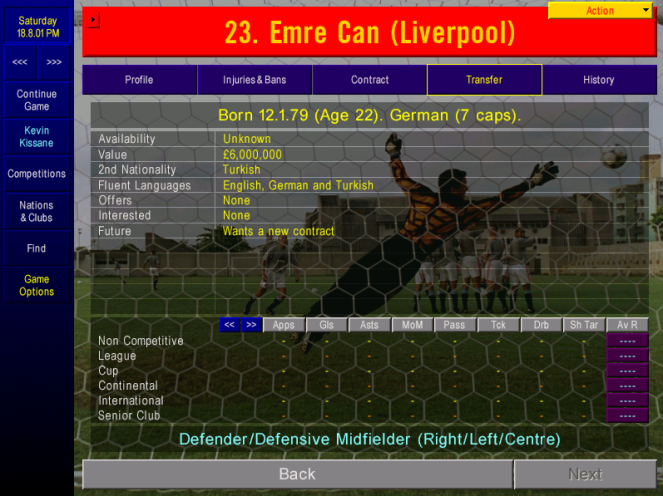 Not even kicked a ball yet, and already asking for more money. Presumably to absorb the cost of his exuberant post season holiday. Ah well, plenty of money in the pot, so negotiations have begun. Definitely no place in the starting XI this time out though. Little upstart. As for the rest, it’s pretty straight forward. Origi misses out in favour of new signing Sadio Mane. He partners Coutinho just behind Daniel please-don’t-get-injured Sturridge. I also favour Karius over Mignolet despite their handling being an above-average 17, the German edges it with better reflexes.

It’s a narrow yet attacking formation, which often works best in Champ Manager 01/02. The standard 4-3-3 will be the alternative which heralds similar results. Jordan Henderson is the default captain. I’ll stick with that. Here we go, the first game of the season is here, and it’s LIVE.

An impressive first game of the season then. First goals of the season for Coutinho and, surprisingly, 2 defenders. Sakho buries a lovely low drive after a 1-2 with Sturridge before being reverted back to CB. This was following an unknown injury to the other goalscorer, Dejan Lovren. A man of the match performance from captain Jordan Henderson, including a assist, vindicates the CPU choice thus far. Pretty much perfect. But then…. 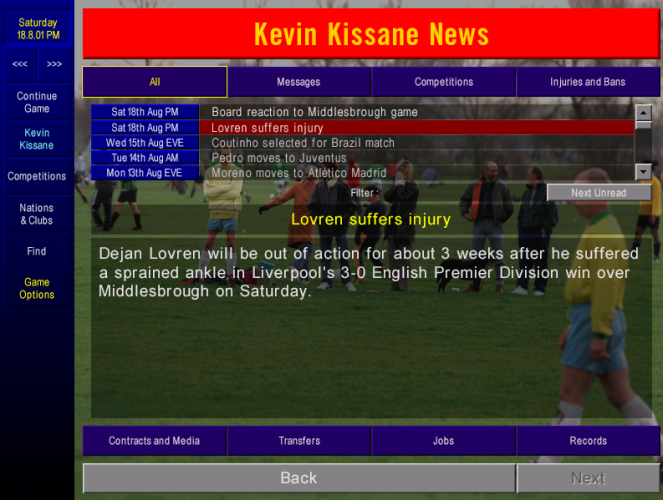 So the unknown injury turned out to be a ankle sprain. This will mean a makeshift left back is required already. I have my hopes pinned on the revised 15 million bid made for Martinez. In other results, the first blue heavyweight match of the season between Chelsea and Man City went the way of the London side after 2 quick headed goals in the first half.

In transfer news, Chelsea’s Branislav Ivanovic swaps London blue for Merseyside blue in a £750,000 move to Everton. Only a day later he plays in an Everton side that convincingly beat Jose Mourinho’s Manchester United, who bizarrely have already played 2 games when 7 teams are yet to even play. Don’t give Jose Maureen reason to whine about fixture congestion already, Premier League!

Emre Can gets his wish and signs on for 5 more years, and in the league cup Liverpool are drawn against Russell Slade’s Charlton Athletic at home. A good chance for some rotation in the squad. Next up is another Premier League heavyweight battle as Liverpool take on Arsene Wenger’s bottlers-i mean battlers at the Emirates…. 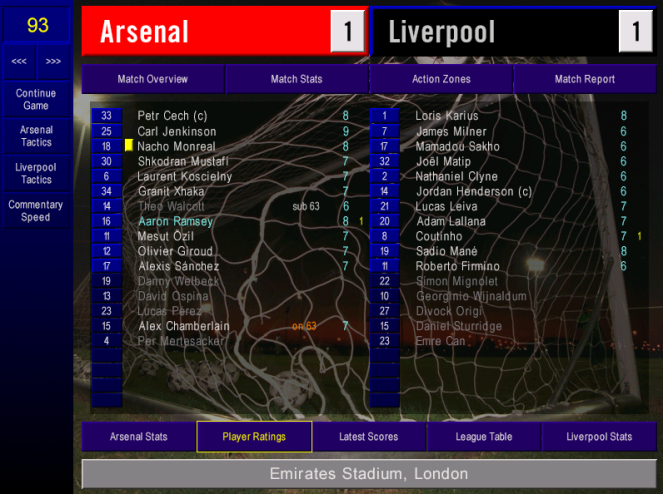 Not much to complain about here, despite taking the lead. A tight first half followed by very little happening in the second other than 2 dipping efforts from Coutinho and Ramsey respectively. A respectable point away from home.

The first European classic of the season took place at the Stade Louis. Europa League champs Sevilla (hmph) took on Champions League winners Real Madrid in an-all Spanish affair. Sevilla missed ALL their penalties in the shootout after Madrid had pegged back from 4-2 down late in normal time. Deflated.

The fixtures are coming thick and fast now. After a solid point gained at 1 potential title contender (before February at least), now it’s Pep Guardiola’s Manchester City at Anfield. With Lovren out Sakho will cover once again, with Milner being drafted to left back. A look at the squad shows West Ham are eyeing up Nathaniel Clyne. I could potentially need to replace 2 full back positions shortly….

Would you look at that. This result is a thing of beauty. From the kick off Liverpool don’t give Citeh an inch, limiting them to 1 solitary shot on target. An already impressive performance improves even more so with the arrival of Wijnaldum for the ineffective Mane on the hour. He takes the man of the match award even with only 30 minutes on the pitch. Nice.

That result leaves Pool at the top of the table after August’s matches. With only 1 goal conceded, no defeats and averaging 2+ goals a match, it’s a promising start.

At the bottom, Burnley are the early relegation-form side, conceding TEN goals in their 3 games. Ouch. I bet Joey Barton didn’t bet on that. Arsenal are also unbeaten after 2 games, which is unprecedented at this stage of the season!

Although September is fast approaching, August isn’t done with me just yet…..

Inigo Martinez, Liverpool’s transfer target, has made an unexpected move of staying on in Spain. Back to the drawing board then. Until next month!

You can read the first part of this journey here