Can the form continue? Please?

THE CAVEAT: Any transfer bids must be accepted. Stay away from me with, Jim White.

Welcome back. The season has started well, almost a quarter of the way through. Long may it continue. October is a packed month.

I can only think this decision went down to goal difference. Or more likely, the Premier League trying to keep Maureen quiet. Both Liverpool and United won all their 5 league matches in September; Pools goal difference was 12-1, United’s 16-4. United had an impressive 6-1 win away, Pool 4-1. It’s okay. I’m not bitter. I’m not going into measuring penis territory to try and downplay Jose winning the award over me. Not at all. He’s such a twat though, isn’t he?

Zlatan Ibrahimovic on the other hand has certainly been impressive. 6 goals and 2 man of the match performances in September is excellent. However, again it isn’t a sure thing for me. Lukaku fired in 8 goals and also clocked 2 man of the match awards. This season is very competitive already.

From good news to bad news. The captain is out for a while. Hmmm. 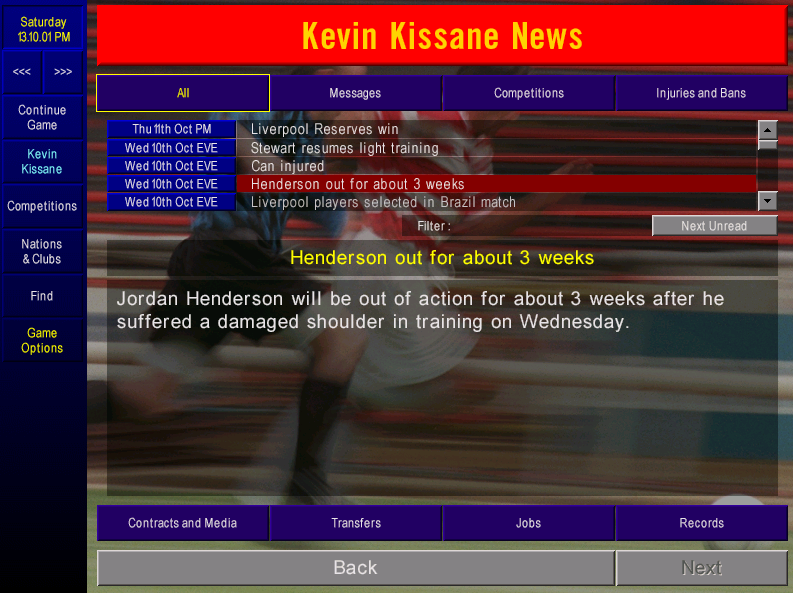 And so I’m left with this fucking mess. Key players Lallana and Henderson, my sit-in midfield, are out. Lovren wants more money. Back up players Emre Can, Matip and Joe Gomez are also out. I can still put together a decent XI, but good enough to triumph over the only other unbeaten Premier League side? 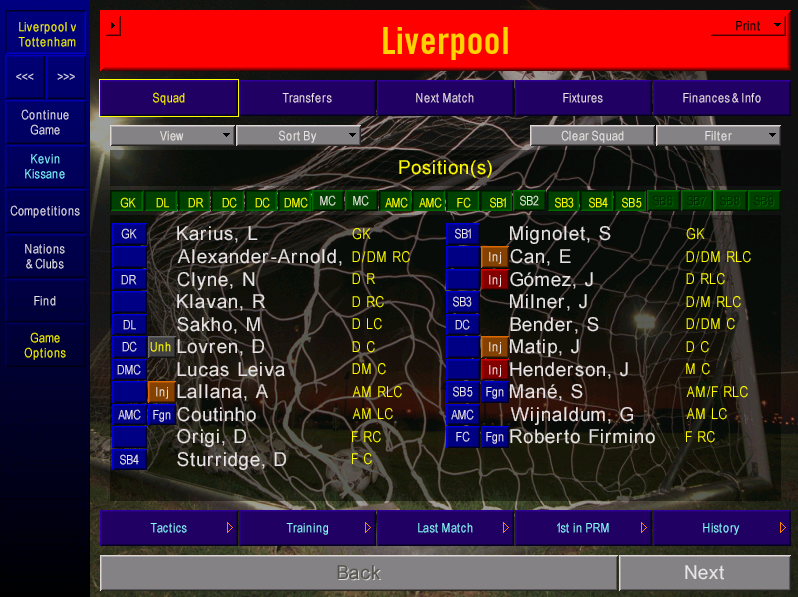 Milner fits in well here for a rare appearance, however attacker Sadio Mane will have to pull a shift in deep midfield. Trent Alexander-Arnold is there for cover, but to throw him into such a fixture could be football suicide.

Although it ended only 1-0, the result was never in doubt. Lloris kept the score respectable, but Firmino earns the points with a low drive. Liverpool are now the only unbeaten side left! The success is certainly resonating with ‘several respected pundits’. I’d like to think of those as being The Guardian Football Weekly crew. Just to feel a little smug.

Unrest at Arsenal? Paulista appears intent on creating it. Ironically it’s usually him letting everyone else down. So i call bullshit. 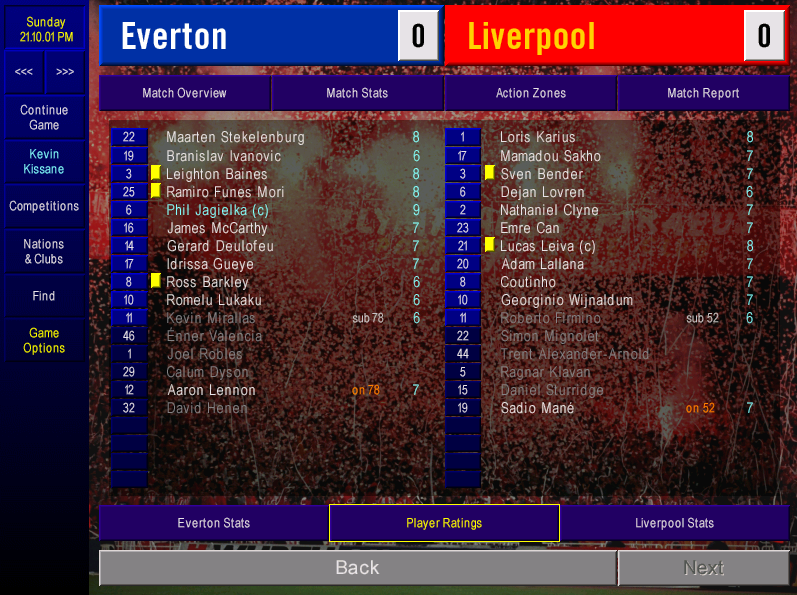 Not much to tell here. Liverpool pressed hard but Everton were resilient. It could have been better, but it could of course have been much worse. A rare outing as captain for Lucas Leiva who has commanded the sweeper role well all season.

………Fuck. Well i am truly flabbergasted. Plus i have no choice but to accept the decision. It’s as good as a transfer bid. It’s just as disappointing. Lucas is promptly relegated to the reserves and £3M added to his value.

Emre Can is now my main man in the deep role, and has started solidly. Sadio Mane, still filling in alongside Lallana, puts in a great shift of creativity and movement. Even more so was the case from Coutinho, both man of the match and the match-winner. Joel Matip puts in a substitute appearance of note after Lovren goes off injured. Again.

And it’s another month out. Looks like Matip is going to be busy.

The first managerial casualty of the season is Antonio Conte. With a W4-L6-D1 record and poor results against both Spurs and Man United, Roman did his trademark thing.

Good news elsewhere, Lallana’s services are retained. For now. I worry Lucas’ need for change could spark similar reactions from others. Liverpool are not in Europe after all. 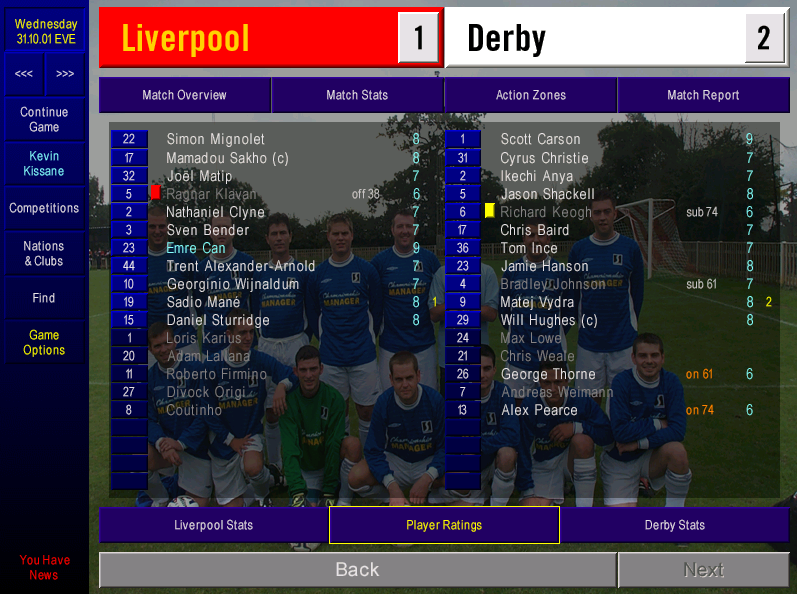 A strange result, this one. An excellent cup tie, with chances for both sides throughout. Game of Thrones resident Ragnar Klavan’s helpful red card exit in the first half stifled Liverpool into the 2nd half. Derby’s Vydra hits 2 quick goals, Mane pulls 1 back but Scott Carson plays out of his skin to help Derby hold on for a league cup upset. 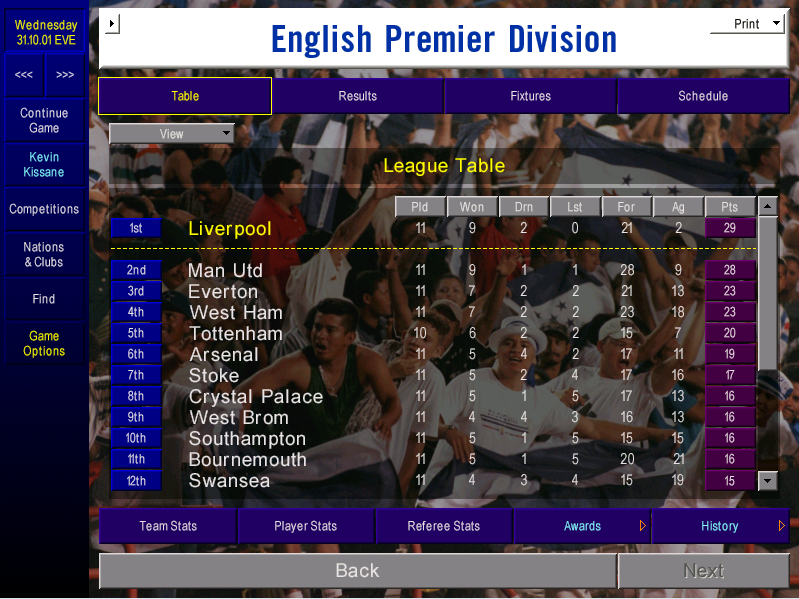 Despite the league cup exit, and Lucas’ change of plans, October is another great month. Liverpool are unbeaten with nearly a third of the season gone. Scoring almost 2 goals a game. Only conceded 2 all season. Yet United are still close. Competition is starting to take shape.

At the other end, lowly Burnley are still without a win. They’ve conceded more than anyone has managed to score. Leicester on the other hand enjoyed an month unbeaten, including 2 wins, and climb to 15th. I smell potential manager of the month.

Find out next time!