Dragon Ball FighterZ is the upcoming 2.5D fighter released later this month. Very much in a similar vein to the Marvel vs Capcom series, FighterZ takes place in the iconic Dragon Ball anime universe. Teams will consist of three unique characters, with a roster filled to the brim with all the beloved Dragon Ball personalities. If executed properly, it stands to be not just the best Anime tie-in, but one of the finest fighters of 2018.

This past weekend saw the closed beta test went live, with many players getting their first taste of the game. From just the small amount of content on offer, 2 things are clear; as well as being immensely faithful to its community, Dragon Ball FighterZ is fantastic fun.

For those familiar with other Arc System Works’ titles, particularly the Guilty Gear XRD series, this will not come as a surprise. But Fighterz is as unique as Capcom’s Marvel games were in the 90’s. Using an updated version of the Guilty Gear engine, Arc System Works have created a fighter with blistering pace accompanied by wonderful and wild animations. It’s also incredibly easy to pick up, and most crucially, understand.

Special moves are executed simply, either with Street Fighter fireball or ‘down down’ motions. Each character has but just a few moves each, but cover their anime/manga counterpart attributes to perfection. Goku’s Kamehameha has never looked better. Such moves are of course regulated by a gauge meter. This is powered up by holding 2 of the face buttons or blocking/attacking your opponent successfully. Opportunities are fewer in the case of the former, but really gives off the feeling of the anime’s famous powering-up scenes.

Stringing together a succession of face-button-assigned, one-button attacks result in simplistic yet spectacular combos. These can then lead onto short gaps that potentially spring further offence; a dash attack, more single attacks, maybe a super move. Alternatively if you’re defending, perfect timing can result in teleportation away from the opponent. Or if you’ve got the timing, attacks can be parried Street Fighter III Third Striker-style. FighterZ’ simplicity paves the way towards stunning, seasoned strategies.

The only apparent gripe is the variety of fighters. Sorry, FighterZ. Being the fairly universal system that it is, your team of 3 (Goku/Vegeta/Gohan being an example) might look distinctly different. However they more or less fight the same. But with Piccolo/Android 16 being added, the latter a big grappler a la Zangief, there is sure to be even more from the finished product. 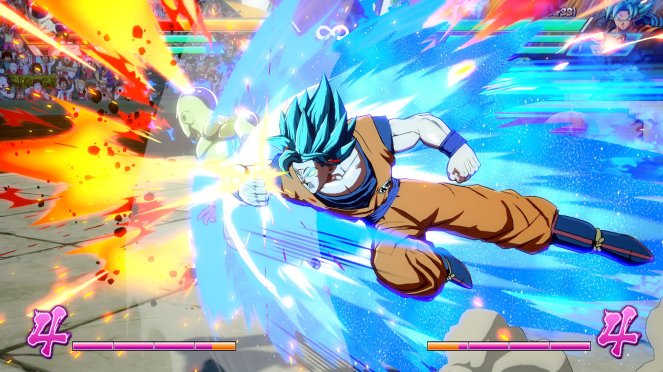 Being a tag-team fighting game, your team mates can be used to assist as well as being replacements. A quick tap of the ‘L’ trigger can be used to break up opponents combos, add to your own, or provide a simpler means of attack. Most spectacular of all are the assisted super moves. Nothing says ‘pow’ in DBZ more than a combined Kamahameha wave.

Dragon Ball FighterZ’ mission statement is clear: create a simple yet effective fighting game that appeals to fans of the series and the fighting genre. It may not strictly be for the hardcore fighting fan, but FighterZ will surely be distinct enough to shine beyond just the anime fan-base. I personally haven’t been as excited for a franchise-based beat ’em up since Marvel Vs Capcom 2. Once the finished product is released, Dragon ball FighterZ is going set both the anime and video game genres on fire.