Naoko Yamada’s adaption of Yoshitoki Ōima’s manga Koe No Katachi, titled A Silent Voice, is a coming-of-age drama. A story of atonement and friendship, and much more.

6th grade student Ishida Shouya is the class prankster. That is until his increasingly-serious bullying behavior results in a hearing-impaired classmate being transferred out of school. Ishida then learns first-hand how it feels to be the victim. The original title translates as “The Shape of Voice”. It not only displays at both the beginning and end of the movie, it is also curiously closer to the movie’s meaning.

A Silent Voice is a movie about many things; self-worth, friendship, love, restitution and regret. It originates with bullying as its focus; its many forms and repercussions of such actions. Ishida’s pranks are cruel, unfair and systemic. And although he is responsible for the majority of the bullying against Nishimiya Shōko, his friends and even his teacher immediately and continually reject their new classmate’s difficulties, as well as her personality. Ishida’s happy-go-lucky life is turned upside down when both friends and staff ostracise him following Shōko’s bullying-driven transfer.

Bullying is a subject that is of course very real. Whether it be shunning someone who just wants to be friends, or throwing their school bag into a pond. Yamada’s delivery of such actions plus their repercussions in later life are eloquently delivered. There is a distinct tenderness to Yamada’s direction, despite the movie exploring a number of unpleasant and difficult topics. Scenes with sign language are subtly non-subtitled to give you a flavour of what it’s like to deduce what is being said. Equally effective are silent Shōko scenes that lead you, through family facial expressions and Shōko’s actions, to empathise with their plight. Empathetic, endearing yet subtle. 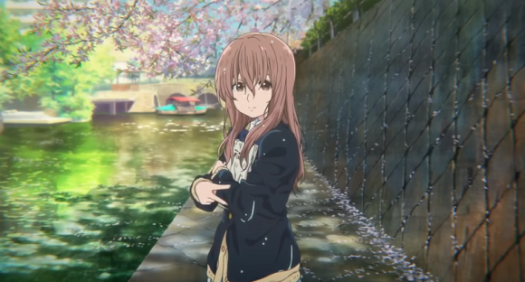 A Silent Voice makes extensive use of photography work. The palette is lightly-coloured and bathes the city of Ogaki with elegance and beauty. More so than the real thing, which is what animation should be; a representation of a world and it’s character, not the world itself.

The soundtrack is also a delight. Soft piano and ambient melodies capture the mood just as effectively as the moments where silence take centre stage in delivering emotion. It’s an auditory experience that’s memorable as a whole as opposed to standout tracks that stick in your mind.

Beguiling, sensuous, delicate yet brilliant, A Silent Movie is simply a captivating experience. The subject matter may well be polarising for some, but it’s a powerful movie that’s definitely worthy of anyone’s time.

A Silent Voice is available on DVD/Blu-Ray here