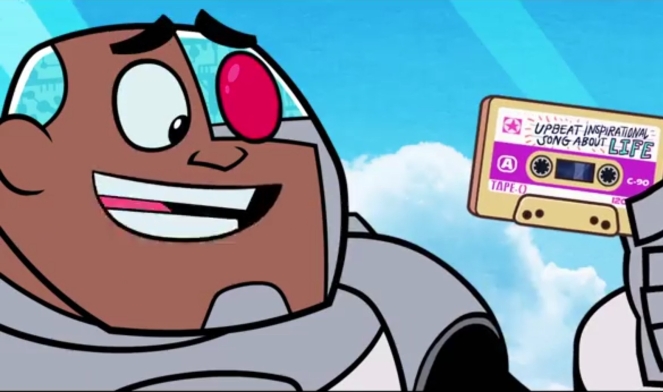 This past month I decided to treat my daughter to my local cinema’s “Movies for Juniors” promotion. £2.50 a ticket gets you into an early doors family movie showing, in the biggest screen the complex has to offer. Can’t say fairer than that. But this trip was met with initial caution and scepticism.

Having used the same promotion to watch Incredibles 2 the previous weekend to this visit, it was met with mixed results from the younger contingent in the audience. Murmurs of “is it finished yet?” were common-place at times, given the 2-hour running time. Now that is not a damning evaluation against Incredibles 2 as a movie. It is a remarkable return to the fun, family/superhero comedy vibe 14 years in the making. But it should be no surprise that a family movie, with many minutes of overly-saturated plot-elements, will test the best of attention spans of the lower demographic. My daughter included.

Then came along the next Movies for Juniors option – Teen Titans Go! To the Movies. I’d never seen its namesake series Teen Titans Go! before. As a superhero comics fan, particularly Teen Titans, this is a pretty terrible effort from me. Having viewed the trailer together it garnered giggles, gusto and a resounding “let’s go daddy!” I have to admit I was as excited as she was.

It had been quite some time since I’d seen a movie without reverting to my usual dossier-compiling habits (Wikipedia/IMDB/general consensus), so the aforementioned cautiousness and scepticism elevated to eagerness and nervous excitement for the both of us. In the back of my mind however I couldn’t help reminding myself of the previous weekend’s minor misgivings.

A child’s happiness and joy is the most wondrous feeling for a parent. For me personally it is the most amazing feeling in the world. As is the feeling when a decision made reaps of success in abundance. And so it was, just 90-or-so minutes later, that 2 children left the cinema. Not just a father and daughter taking a speculative trip to occupy a Saturday morning. For you see, Teen Titans Go! To the Movies wasn’t just an excellent movie, it was a surprisingly spectacular movie experience for the both of us. 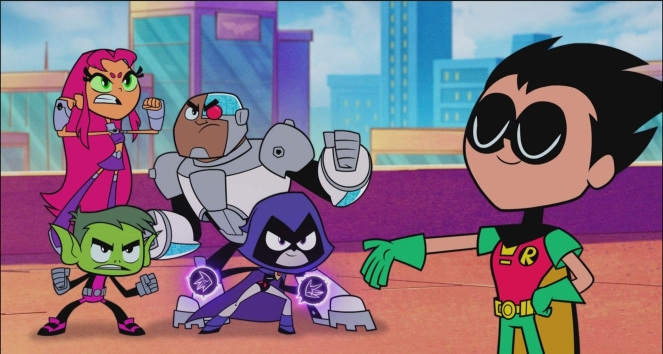 Teen Titans Go! To the Movies is a smarty-pants spin on superhero movies and superhero tropes. Craving respect from their fellow superheroes such as Batman, Superman and Wonder Woman, the team believe a Hollywood movie is the solution. And so Robin (voiced by Scott Menville) and his crackpot team of Cyborg (Khary Payton), Starfire (Hynden Walch), Raven (Tara Strong) and Beast Boy (Greg Cipes) venture to Hollywood to create the movie that will garner that respect. What unfolds is a wacky, silly, stupid yet slick and smart musical action adventure in the comedy mould of Lego Batman.

For anyone who has seen the 5-season strong Teen Titans Go! series, the chibi-style animation, characters and humour remains true to that form in its big screen counterpart. But as with many transitions to the cinema, all those attributes are tweaked with considerable success from its original format. Particularly the low brow humour.

Its superb voice cast, again retained from the series, maintain the madcap mood relentlessly. Factor in the magnificently meta additional cast including Nicholas Cage as Superman (finally), his real-life son Kal-El as a young Bruce Wayne and Will Arnett (who also produced the movie) as Slade and you’ve got a world class cast. Also deserving of an honourable mention is British comedian Greg Davies also, and inspired choice for Balloon Man. “Hello!”

But such low brow humour and guffaws can be too much for some. Upon treating my daughter to an after-movie McDonald’s Happy meal as a treat, cries from select other parents declaring their hatred for “the worst movie I’ve ever seen” was met with a wry smile from myself. A simple yet resounding “it wasn’t, Daddy, it was excellent!” daughter-sponsored review became a suitable counter-argument. And fair enough, if such simplistic, pop-culture humour isn’t for you, you went to the wrong movie. But it is its simplicity, pop-culture and fourth wall comedy that makes it so good. Its superhero origins-inspired gags are worth the admission price alone.

Such a successful cinema visit still resonates at home almost a month after the event. The soundtrack has become a staple listen for car journeys, and has quickly become a quotable source of humour around the house. Bear in mind my daughter is only 6 years old. And yes I am proud of my achievements. We’re both now well into the third season of the show also (thanks to Prime Video, watch it now), which is also relentlessly hilarious. Given each episode lasts a little over 10 minutes, its transition into a 90-minute movie is a remarkable and genius achievement. Thank you Warner Bros, I now excitedly await the DVD release. And you should too.