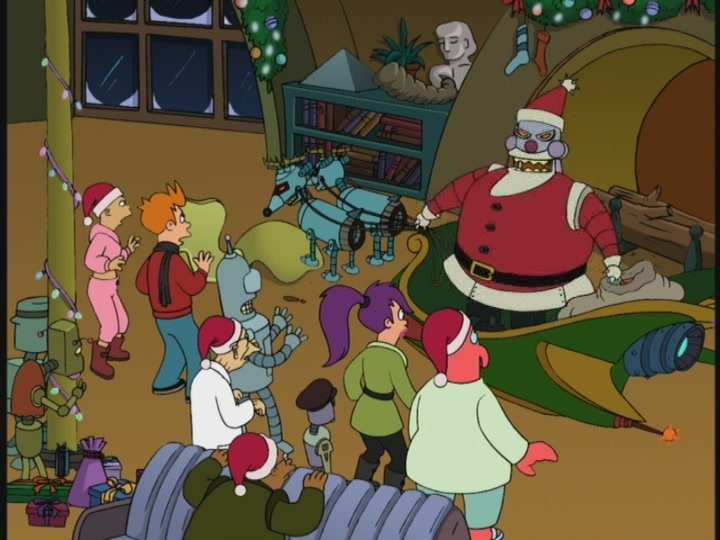 Do you ever feel like the Christmas build up is going a little too fast? I’m already FIVE days behind on advent! Apologies for that. But, like always, each entry provides a bit of Christmas magic for your viewing pleasure. And there are few more entertaining than Futurama’s take on Christmas.

Christma- sorry, Xmas, in the year 3000 is an entirely different prospect. Pine trees have been extinct for 800 years, and entertainment comes mostly in the form of preserved heads of 20th Century comedians with 20th century-related jokes. Fry, who for the uninitiated was frozen in time back in 1999 only to awake 1000 years later, longs for an Xmas of old. Pine trees aside, the decorations are up and Fry wants to cheer up a lonely Leela with the perfect present on Xmas Eve. No mention of presents goes without a mention of Santa Claus, who in the future is very much a different proposition….

Matt Groening’s side-splitting comedy series (no, not that one) conjures up an absurd and humorous vision of a Christmas future. Quite frankly, turning Santa Claus into a robotic judge, jury and executioner is a stroke of brilliance. Xmas Eve becoming a purge-scenario after closing time pushes that brilliance even further, as Fry and Leela run for their lives as the biggest holiday of them all approaches.

The supporting cast serve up just as many great laughs as you’d expect. Prolific napper Professor Farnsworth, Fry’s distant nephew, sleeps his way down the ski slopes to a bronze medal he doesn’t realise he’d even entered for. Bender befriends homeless robots for the purpose of a robbery spree. Zoidberg’s face glove. Amy’s arousal at the opposite sex’s injuries is as equally hilarious as it is a bit, you know, weird.

“What’s the problem? Simply get down on your claws and do the apology dance!!!” – Zoidberg

Then there are the references to traditional Christmas stories. Amusing references of course; the most glaring of all being Fry dangling from a clock, a la The Hudsucker Proxy, but not just any clock. A digital clock. Tinny Tim, one of the homeless robots, is of course Tiny Tim from A Christmas Carol. There are many more of these, and they just add to the entertainment and Christmassy vibes.

Xmas Story is not just an excellent seasonal Christmas episode, but also serves as a glaring example of how good Futurama really was. The laughs per minute ratio is phenomenal, and has some of the best lines ever written for the show. By this point Futurama had established itself as animated comedy of the highest order. Adding Christmas, sorry, keep forgetting, Xmas, somehow added an extra layer of quality comedy. Unmissable television.